The Great Hall sits at the very heart of the Tudor palace, towering over the surrounding buildings. It was designed to impress and to proclaim Henry VIII’s power and magnificence. 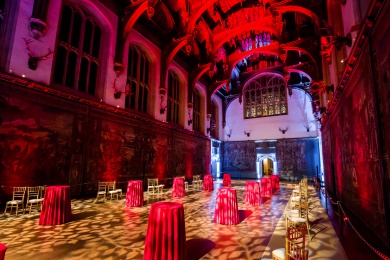 On the walls of the Great Hall hang a series of tapestries which were probably commissioned by Henry VIII and were certainly first hung in the Great Hall in 1546. 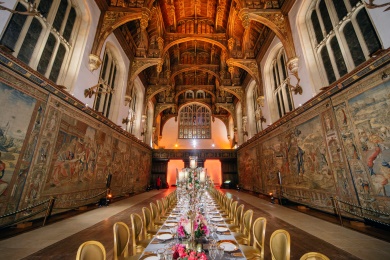 Great halls were places for eating and for entertaining. On a day-to-day basis, this Great Hall acted as a large refectory for the lower-ranking members of the royal household and servants. Meals cooked in the nearby great kitchens were served here twice a day.

On special occasions the Great Hall was used for plays, dances, and masques. James I's court spent Christmas and New Year 1603-4 at Hampton Court to escape an outbreak of plague in London. During the festive celebrations William Shakespeare and his company of players performed A Midsummer Night’s Dream in the Great Hall. 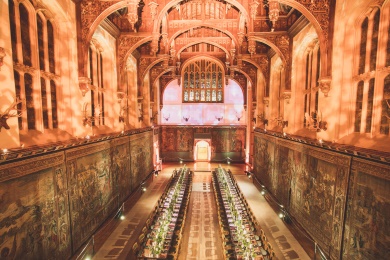 By the early 1700s the Great Hall had stopped being used for dining and instead a permanent theatre was built into the space. It included a stage with tiers of raked seating for the audience.

The theatre was removed in 1800 by the architect James Wyatt who attempted to restore the Great Hall to its Tudor glory. 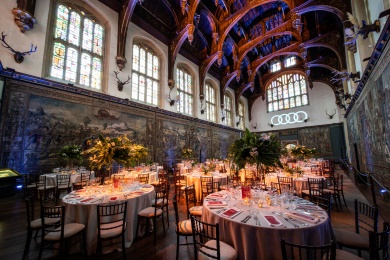 For further details on holding an event in The Great Hall at Hampton Court Palace please contact: hamptoncourtpalaceevents@hrp.org.uk