At the Kensington Palace Orangery Pinstripes and Peonies celebrated the wedding of A & S who had some very special, furry and four-legged members in their bridal party. The traditional corsages wouldn’t work and neither would the buttonholes so they created bespoke flower collars for their fluffy friends. They didn’t quite upstage the elegantly beautiful bride, but they definitely stole everyone’s hearts.

Over at Chiswick House, S & H wanted a rustic, paired back look for their wedding breakfast in the marquee. Pinstripes and Peonies created long garlands of mixed seasonal foliage and greenery to run down the centre of the tables with delicate, classic white roses tucked within. A design that was to become an instant classic and one that they have adapted several times since in all seasons.

One final beautiful day to look back on was the wedding of A & A at the ornate Gibson Hall. Pink and white were the colours of the day with a mix of both low and tall table centre designs and lots of blousy hydrangea with elegant roses to create a soft, summer look.

So, for any couples about to celebrate their one-year anniversary also, congratulations! Paper is usually the theme, so they could have a go at making some amazing origami flowers, but for those of you who'd prefer say, a stunningly beautifully, lavish bouquet for that special someone instead, you know where Pinstripes and Peonies are. 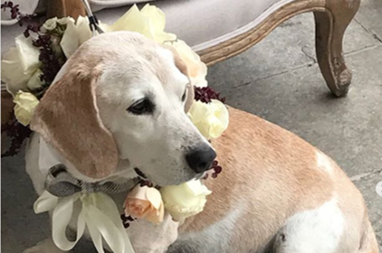