Frobacks on the BBC? Frobacks on The Greatest Dancer? That sounds like 2019 has got off to a great start and you would be absolutely right!

Sternberg Clarke's top dance act Frobacks – who have performed at some of the biggest industry events of last year including at venues like Kensington Palace and Guildhall – were to appear on the BBC’s top new dance show The Greatest Dancer. From Simon Cowell’s production company, there was no doubting that this would be a huge TV hit and they were so excited for the lads to perform. Frustratingly, they had to wait until Saturday night to see how they did. 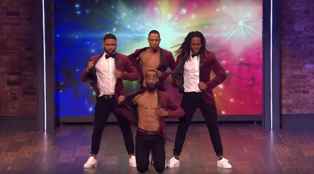 How long would viewers have to wait to see Frobacks on primetime TV? Thankfully they didn’t have long to find out as they were the very first act on the show.

The team at Sternberg Clarke love what the group do and knew they had talent but what would dance captains Cheryl, Oti Mabuse and Matthew Morrison think?

As it turns out, at first it didn’t matter. The dancers perform their routine in front of a two-way mirror so that the audience can see them but they cannot see the audience. Unless 75% of the audience like the act, the doors stay closed and the performers walk away, never even getting to see the crowd. Talk about pressure!

You can watch the video of Frobacks’ performance below though as you may have guessed from the title, they go through! Everyone at Sternberg Clarke is so excited and proud of these four fabulous dancers and thinks it just goes to show what a lot of hard work can do!