Sales and Marketing Director, Chloe Martin, shares some of the delights provided by Moving Venue  at the Guildhall on 12th September.

“Agreeing to cater for all the Unique Venues of London, respected guests and suppliers, including other caterers under one roof - were we mad or crazy?

As any supplier involved in showcase events such as this knows, we can cater for thousands of guests at one time across multiple events and not blink an eye.  Cater for the great and good of the industry including your competitors and it’s a whole other story!

You want to showcase your best without being too overly fancy; you want to surprise and delight, but not shock. So we set about gathering the event team responsible for the conception and then execution of this event. Executive Head Chef David Ridgway, Head of Planning Elle Harper, Group Head of Operations Kim Laley,  Head of Moving Venue Operations Slav Adamek, Smart Group CEO Greg Lawson and myself, Sales and Marketing Director. The result: a night to remember at Guildhall.

When deciding a menu for an event such as this, it’s important to establish a balance in the offering. So alongside client favourites such as the Korean chicken with gochujang sauce, we served new canapé ideas such as the artichoke lollipop – this ball of artichoke ice cream is covered in white chocolate and dried Jerusalem artichoke skin powder. A marmite kind of canapé! 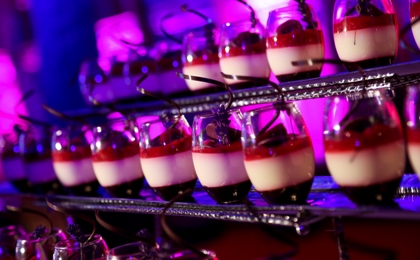 Bowl food included luxury ingredients such as the lobster and mango cocktail, as well as our venison tartare, pickled radish and black sesame sauce. A firm favourite on the night was a mini plate of a new autumn winter main course – lamb neck with white onion risotto and salsa verde.

Without a doubt though the main buzz on the night surrounded the food stations, and one in particular – mashtini! Who would have thought the simple spud would be the star of the show? Taking such a classic item as mashed potato and combining it with toppings including shaved truffle, pulled pork, Cumberland sausage crumble and Yorkshire puddings, demonstrated elevating a simple dish can often be the way to guest’s hearts (and stomachs). Acknowledging the ever-growing request for vegan alternatives at events over the last few years we ensured a sweet potato and coconut mash option was also available.

Finally, our dessert station offered something for everyone inspired by the purple and silver theme of the invitation. Our pastry team excelled providing items such as the black and silver Tonka and pomelo box, as well as the striking 25th Anniversary dark chocolate and passion fruit dome. These days client requests are more often than not for something to be ‘Instagrammable’, and as the desserts, mashtini and raw bar pictures that flooded social media demonstrated - they aren’t wrong! 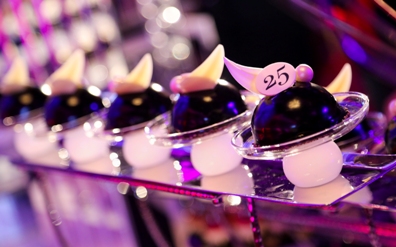 It was a true privilege catering for such a prestigious occasion and appreciate all the kind feedback received from clients, venues and suppliers both on the night and since. Happy 25th Birthday Unique Venues of London!”